Share a memory
Obituary & Services
Tribute Wall
Read more about the life story of Liz and share your memory.

Elizabeth Carol Ann was born on February 22, 1952 at home on the Cote Reserve, Saskatchewan to Harold and Jean (Pelly) Shingoose. Liz was the sixth child out of eleven. She was also the sixth daughter before the couple brought her five brothers home.  She was raised with her 10 siblings on the Cote Reserve on the eastern border of Saskatchewan. In her early childhood she contracted tuberculosis and spent a couple years in Qu‘Appelle, this would’ve been the farthest she was away from home until she headed to Calgary with her cousin in het late teen years. In Calgary, Liz met Henry, whom became her spouse of almost 50 years. Moving to Coronation, Henry and Liz raised their 3 children and enjoyed the blessings of grandchildren that came through the years. Liz spent many years housekeeping at the Coronation Hospital while constantly getting accolades in the local newspaper about her high-triple bowling scores and participating on the hospital-staff mixed-softball team, where she demonstrated her skills as a phenomenal pitcher. Liz was also known as a cancer survivor and was proud to be so. Her first battle with her health was in 1992 with breast cancer, this was a tough journey but worth the fight back to health. Recently, Liz was residing in Designated Supportive Living because of her health and passed away at the age of 70 years. Liz will be lovingly remembered and dearly missed by her husband, Henry; children, Steven, Connie, and Jeannie (Korey); grandchildren, Shaniya, Darian, Bronson, Kylie, Chace, Jaden, Broc & Hunter; great-grandchildren, Michael, Liam, Ryker, Dawson & two more great-grandchildren that she hasn’t met yet; daughter in law, Roxanne; brothers, Gene Shingoose and Jack Shingoose; as well as many extended family and friends. Liz’s family smiles today because they are sure she has found Elvis and she has finally received that long-awaited dance with him. Liz was reunited with her parents, Harold and Jean; daughter, Connie; great-grandson, Aiden; and her 13 siblings that went before her, Emily, Rose, Rachel, Effie, Arlene, Lloyd, Norman and Reginald.

A Private Family Visitation time has taken place and a Traditional Burial will follow at Cote First Nations Reserve Cemetery, Saskatchewan.  For more information in regard to this, please contact Wolkowski Funeral Services, Kamsack, Saskatchewan.

Condolences may be sent or viewed at www.coronationfuneralhome.ca. Arrangements in care of Coronation Funeral Home, Coronation, Alberta. Phone: 403.578.2928. 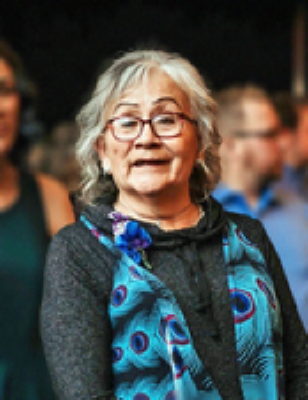 You can still show your support by sending flowers directly to the family, or by planting a memorial tree in the memory of Liz Polege Shingoose